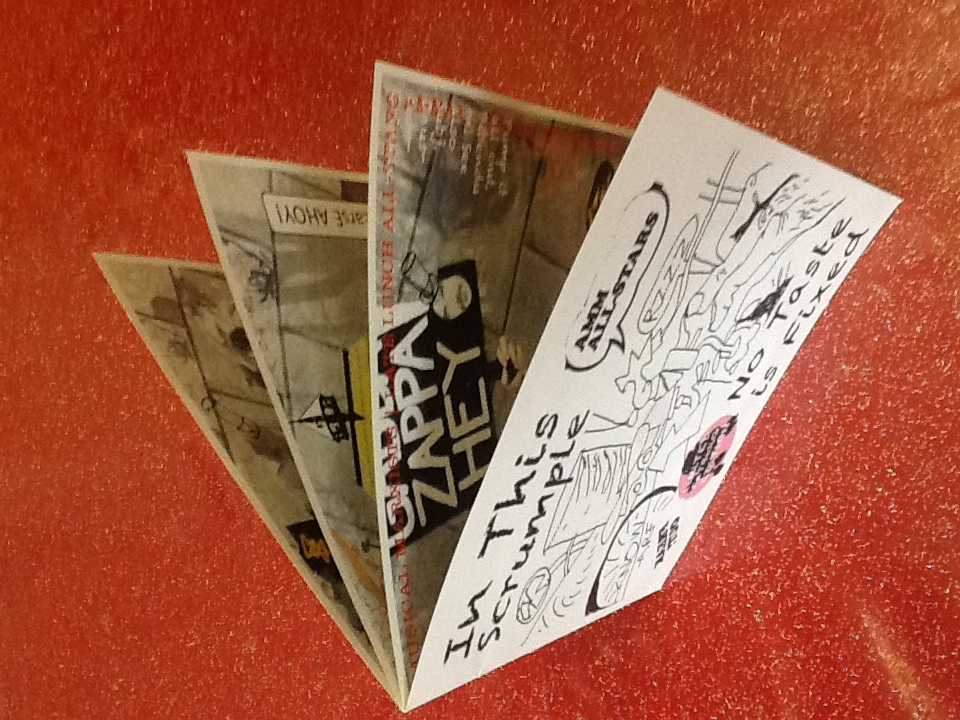 (CD produced for sale at Zappanale #30)

All tracks recorded at Resonance FM.

NB: After coming into Resonance FM to play drums with Luke Davis (track 3), Kit Mackintosh depped for Peter Baxter during his trip to Kathmandu in February (tracks 5 & 6). Thanks, Kit.

HOW do you assess the soundscape of the AMM All-Stars' new album, except by supplementing any new sounds you provoke yourself when walking down the street, sitting in the bath or lying in bed? AMM are the Association of Musical Marxists and, as you listen to their music, you wonder what the old sage would have made of these sounds as, perhaps making music himself, he made his daily walk along Soho's Dean Street to the Reading Room of the British Museum. How would he have considered Luke Davis's typewriter or Peter Baxter's table percussion in "Stay Time and Gargle", or Kit McIntosh's rolling drums in "Stars in Focus"? Would he have found music in kicking a stone against railings, splashing his boots in an open sewer or drumming on brickwork? Or would he have grunted like the vocalist does on "Fine Selected Gruntwork" and declared in unison with the AMM: “Atonalism is not dead.” Who knows?

It would be all too easy to misconstrue the power dynamics of this album by AMM All-Stars, considering that this improvising unit was founded by Ben Watson aka Out To Lunch, one of the most renowned biographers of Frank Zappa (and Derek Bailey, let’s not forget). In fact, the interplay here is “absolutely free” (with repeated openings to more regular structures, it should be noted) while answering Zappa’s famous question with a sonorous “yes, humor does belong in music”. Then again, make what you want of the reference to the “other” AMM. However, the stupidity of a reviewer must somehow evolve into something more useful to the potential listener. So read on.

This AMM stands for “Association of Musical Marxists”, while “All-Stars is the kind of name used by an act you might see at a Variety Night on a pier in an English seaside town“. Together with Watson, Graham Davis, Peter Baxter, Dave Black, Paul Shearsmith, Robert Goldsmith and – in two tracks only – Kit Mackintosh operate a wide and varied instrumentation, verifiable at the link above where you can also listen to the performance (the group’s entire recorded output is available over there too, with a few clicks).

An immediately detectable feature is the evident sweetness, almost childish, of the improvisational trait despite the scents of no-genre anarchism. It may be for the choice of timbres, but In This Scrumple No Taste Is Fixed never really weighs on the ears, or strains them in any way. One perceives hundreds of cues dictated by sheer memory, by recent or distant experiences, by the continuous urge to switch roles and mix instantaneous views.

We witness the parallelism of individual paths, often miraculously coinciding with a surprising cohesion. There’s still room for riffs, there’s always the need to remember where everything started from. The frail skeleton of a song elicits nostalgia before turning into out-and-out mockery; quiet chords float in between uncontrollable propulsion and conscious grunting; hints of (inevitably ironic) seriousness dissolve as toys for animals are employed as a rhythmic and contrapuntal element. Plus, the occasional snippet of spoken word. You name it, AMM All-Stars does it. With innocence.

Beyond cheap psychology, and cherishing memories of the joyful fun of this writer’s early sonic unruliness – what has become of my friends of adolescence? – I believe that listening carefully and repeatedly, playing the thing loud if you elect to cheer yourself up, is appropriate. You may even decide to start your own All-Stars at the end.